As global vaccination rates climb and economies recover from the pandemic, there still lies the looming threat of rampant inflation. Subsequently, this risk has provoked investors’ appetite for inflation-hedging commodities such as precious metals. Precious metals which include gold, silver, platinum, and palladium are an attractive asset class that not only have lucrative potential but also serve as an effective diversification tool due to its low correlation with equity markets.

Palladium is deemed to be not only the most expensive but also the most scarce out of the precious and platinum group metals. Its main functions include acting as a catalyst in cars and converting toxic gases into less harmful substances such as water vapor and carbon dioxide. It is difficult to extract palladium as it is obtained from mining processes as a byproduct of other metals such as platinum and nickel. However, not only is supply tight but scaling up production will also be difficult. The combination of governments shifting towards sustainable policies and the increased demand from automobile companies, has caused the price to surge by more than sixfold since 2016.

Gold, arguably the most famous, behaves as a safe-haven asset, particularly due to its ability to store value for thousands of years. Consequently, what is observed is that governments and central banks will have substantial holdings in this asset, particularly in times of financial turmoil. It also has uses in technology, coinage and it is most accessed by the jewellery sector.

Like gold, silver also has demand coming from jewellery, technology, and additionally, is becoming increasingly sought after for solar cells.

A 2019 study from the Resources Policy investigated the hedging capabilities of gold and palladium in 32 OECD countries using data that ranged from 1987 to 2018. Out of the thirty-two countries, gold has proven its ability to hedge inflation risks in fourteen countries; palladium managed to do this in twelve countries According to a 2019 research paper, it was demonstrated that palladium had a superior hedging performance over gold and only had partial hedging effects, whereas the value of palladium increased more than the proportional increase in the inflation rate.

The paper concluded that the ability to hedge is largely influenced by macroeconomic factors. This sentiment is consistent with another 2021 study that focused mainly on African markets. This study showcased that in the countries it investigated, inflation risks can be at least hedged away by one type of metal.  More specifically, palladium serves as a great hedge in Congo and Namibia, silver in Ghana and South Africa, and platinum in Morocco and Tanzania.  Research has shown  that the hedging capabilities of the precious metals vary across countries as each nation has its own set of macroeconomic challenges.

Despite the volume of financial literature in support of gold as a hedge, a Morningstar report challenges this notion. They argue that although it may provide limited protection, it is rather a ‘dull investment’. Alex Bryan, a Morningstar director, contends that the negatively correlated relationship between stocks and gold held over longer time periods doesn’t always have to hold, as “there are no economic drivers to enforce it”. Gold has lost its purchasing power over decade-long spans and it is even suggested that the hedge is only as strong as its perception to do so.

Precious metals that have been utilised in minute quantities by the automobile industry have an extensive history of price spikes. Palladium in particular has been very volatile. With demand outstripping supply, combined with stricter regulations on air pollution, the spot price of palladium has soared well above gold spot prices. 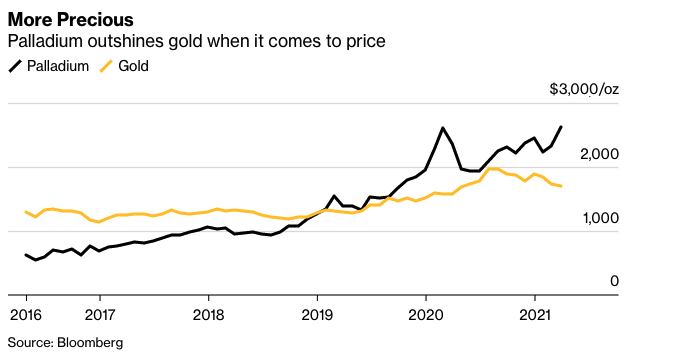 An August 2021 report released by the U.S. Labour Department revealed that more people were returning to work, with unemployment rates falling to a 16-month low from 5.9 percent to 5.4 percent. This labor report suggests that the economy is growing rapidly and has fuelled expectations that the Federal Reserve may begin to taper off on the stimulus. Subsequently, gold and silver have fallen to their lowest prices since March 2021 and November 2020 respectively. Furthermore, when interest rates rise, gold prices will fall as shown below. 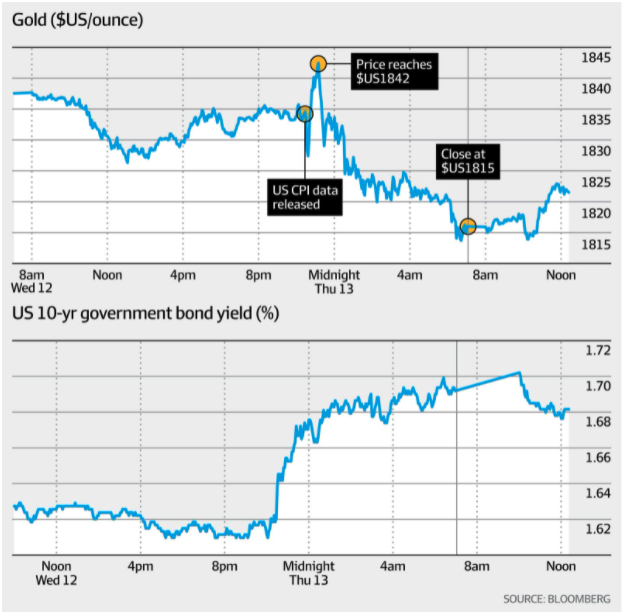 Precious metals are commonly purchased as insurance against a market meltdown. While it has wide industrial and practical uses, it is an asset class that is not a perfect hedge. In fact, nothing is a perfect hedge. Despite that, they are an interesting class of assets, with lucrative investment potential and with the push towards a more sustainable future, it will be interesting to see how it will play out.